How to play Texas Holdem Poker

Learn to play Texas Holdem poker, one of the most popular poker game today.

For an absolute beginner, you might need to first go through this guide: Poker Hands – Ranking of the best poker hands. 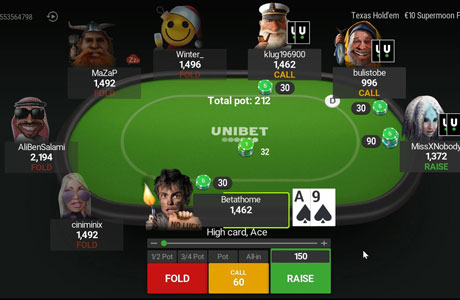 Call: Matching the most recent player’s bet or raise. Eg. the amount of bet raise by the previous player is £10. Then you bet £10 to make a call.

Raise: To increase the amount of bet currently on the round. Eg. the current bet on this round is £10. You might raise the bet to say £20 by betting £20 cash to the table pot.

Fold: Surrender your hand thereby losing any previous bets you may have made on the round.

Check: Until the first bet in a round of betting is placed players can choose to check, or decline to 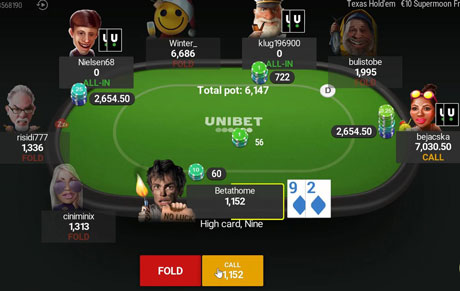 make abet while reserving the right to bet later in the round. You do not need to put up cash to check.

All In: Say you do not have enough balance to meet the current bet but you want to continue betting, you can play All In. This means you are betting all you have in your balance. Subsequent betting will take place in a side pot. When the final showdown takes place if you win, you will only win the chips that are on the pot at the time you went All In. However, this All-In is also used by many, sometimes early in the play where community cards are still in play, to scare/bluff opponents into thinking that they have the best hand.

In poker, the dealer is the one who distributes the cards. In physical poker tables, the role of the dealer is taken by one of the players for one round. In the next round the player on his/her left takes the dealer’s role and so on, rotating clockwise.

In online poker rooms, there is no dealer as such. But one player is randomly selected by the computer to post a small blind (eg. £1). Then the next player to his/her left is also mandated to post the big blind, usually twice the amount of the small blind which is also the opening bet (eg. £2).

In online poker, there is a forced bet of minimal fee applicable to all players on the poker table. These are usually small value say a quarter, and they are called Poker Ante. Antes are usually found in poker tournaments, stud poker or draw poker. The collection of Ante bets are added to the table Pot.

In online poker, especially in Tournaments, the amount of Ante, and minimum bets on the round is increased automatically after two or three rounds. Example: The game starts with an Ante of £0.25 and big blind bet (minimum call amount) of £1. After two rounds (or whichever round the computer decides), the Ante is raised to £0.50 and the minimum call to £1.50. This progression goes on till the end of the game.

Step-by-Step of the Poker Game

In both online and land-based Texas Hold’em Poker games, the game play remains more or less similar. Below explains the sequential step-by-step description of an online poker game in motion. 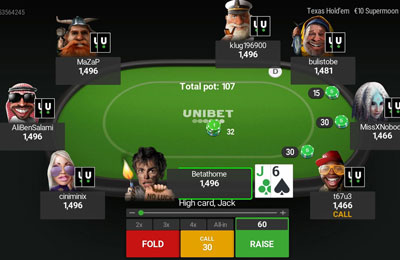 The table opens with the Ante deducted automatically from the players balance and put into the Table Pot at the center of the table. Now with the mandatory bets of the small and big blind players, the game starts. All players on the table are dealt two cards each. Now the online player will be able to see his two cards only. Based on the knowledge of the two cards in their possession, the players start to bet.

Pre-flop – first round of betting:

The small and big blind players had already been made to make their mandatory bets say £1 and £2. Now the bet falls to the next player on the left of the big blind player. This player cannot check. He has the option Fold, Call or Raise.

Then moving clockwise other players also have the same option to Fold, Call or Raise. Till the turn of the small blind player comes. He has the same option, but needs to spend up to the big blind to Call (ie. spend £1 more to make the opening bet of £2).

The turn of the big blind player (opening bettor) comes again. Since his mandatory bet counts as the
opening bet, he can Fold, Raise or Check. Now betting continues till each player folds, go All In or
matched the bet in the pot and Checks.

The computer now deals the Flop, three cards face up for all players to see. Its time now for the remaining players who do not fold to take chances looking at their own two cards, the three flop cards and another two community cards to come. Its time to bluff or bet. 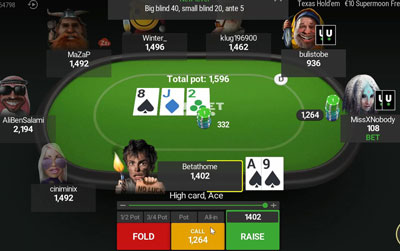 Now the first remaining player on the left of the small blinds player starts the second round. Now all the
players in turn have the option to Check, Call, Raise or Fold. 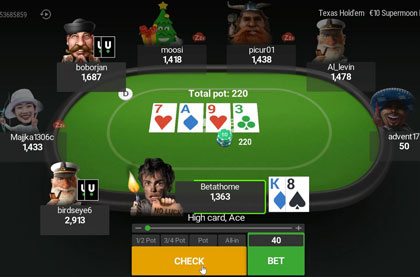 Now the computer adds another card to the three flop cards, face up for everyone to see, Making 4 cards of the flop.

Now all remaining players start betting again considering their two hole cards, the four community cards and another one card to come. 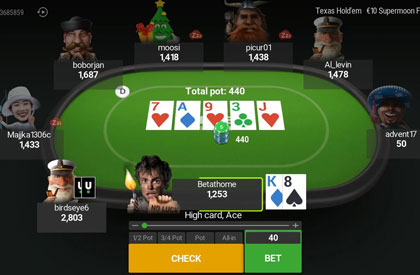 For the last time betting continues until all players fold, put in all their chips or match the amount other
players have put into the pot, then check. 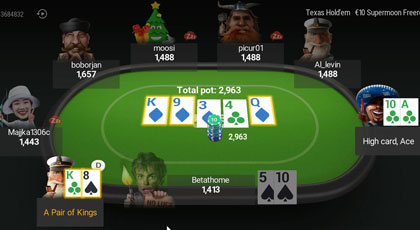 The showdown will come when two or more players decide to match their bets and check. They can use five of the best cards from the two hole cards and the five community face up cards.

Winner takes all except in the case of All-in winner from a previous side pot game.

In case of a tie between players of the best five card hands, the pot will be share equally between them, with the odd chips going to the small blind player.

If you are a beginner at online poker, you can use these poker bonuses to learn with less risk of your money – Best Poker Sign Up bonuses.

This site uses Akismet to reduce spam. Learn how your comment data is processed.

We use cookies on our website to give you the most relevant experience by remembering your preferences and repeat visits. By clicking “Accept All”, you consent to the use of ALL the cookies. However, you may visit "Cookie Settings" to provide a controlled consent.
Cookie SettingsAccept All
Manage consent

This website uses cookies to improve your experience while you navigate through the website. Out of these, the cookies that are categorized as necessary are stored on your browser as they are essential for the working of basic functionalities of the website. We also use third-party cookies that help us analyze and understand how you use this website. These cookies will be stored in your browser only with your consent. You also have the option to opt-out of these cookies. But opting out of some of these cookies may affect your browsing experience.
Necessary Always Enabled
Necessary cookies are absolutely essential for the website to function properly. These cookies ensure basic functionalities and security features of the website, anonymously.
Functional
Functional cookies help to perform certain functionalities like sharing the content of the website on social media platforms, collect feedbacks, and other third-party features.
Performance
Performance cookies are used to understand and analyze the key performance indexes of the website which helps in delivering a better user experience for the visitors.
Analytics
Analytical cookies are used to understand how visitors interact with the website. These cookies help provide information on metrics the number of visitors, bounce rate, traffic source, etc.
Advertisement
Advertisement cookies are used to provide visitors with relevant ads and marketing campaigns. These cookies track visitors across websites and collect information to provide customized ads.
Others
Other uncategorized cookies are those that are being analyzed and have not been classified into a category as yet.
SAVE & ACCEPT